Sushi is probably the most popular Japanese food in the world. It is a VERY good dish and some countries even slightly changed it to match their culture! Eating sushi in Japan was a new experience.

When I first came to this country, people complimented me on my ability to use chopsticks. I was kind of confused because I often went to sushi restaurants in Canada and it was normal to me. But, even though it is a very popular dish worldwide, many people in Japan are always surprised that people from other countries can use chopsticks. "Wow! You can use chopsticks!", "上手!", "You're good at using chopsticks!", are some of the comments a lot of people hear when they move to Japan. These are not bad comments, but people from other countries may not really take them as compliments. Having said that, one day one of my parents came to visit and I noticed they did not know how to use chopsticks very well. I thought to myself that maybe it depends on the people, habits, likes, and maybe like they say in Japan, generation-gap! 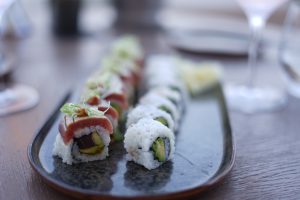 Some very popular types of sushi in North America are California Rolls, Dragon Rolls, and hand rolls. Have you tried them? They are great! But people in Japan don't eat them! That was a bit surprising, because I love them. So, I learned to eat real , Japanese-style, not-changed, delicious sushi, which is also great. in Japan was a new experience.

I love mostly all kinds of sushi, but one I really love is octopus / たこ. Maybe because I often went to sushi restaurants before, I think octopus is normal. But, many people here cannot believe I love it. Their reaction is always interesting to me. in Japan was a new experience.

Which type of sushi do you recommend?